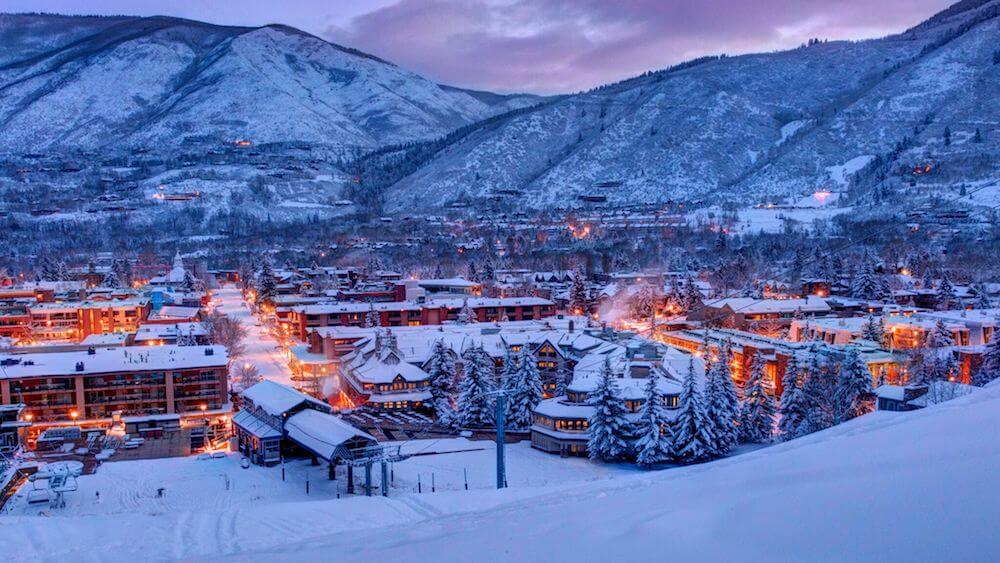 When I arrived in Aspen, Colorado, at the beginning of October for a fam tour, it was just as the town’s namesake trees were reaching peak yellow. It was my first visit and what I knew of Aspen was only by way of its eclectic reputation — was it a luxurious ski resort, where the rich and famous flew into its small airport on private jets? A refuge for nature lovers and unconventional thinkers? Or a high-minded festival town, where the Rocky Mountains serve as a backdrop to a steady stream of art, music, and new ideas? Aspen, I would learn over the next three days, is all of the above, as well as a meeting destination where all of its parts play well together.

I was the sole journalist on the trip hosted by the Aspen Chamber Resort Association, joined by a group of 10 corporate, association, and third-party event planners. We got to know one another as we gathered in the event space at the rooftop sculpture garden of the three-story Aspen Art Museum in the center of town. The museum was designed by the Japanese architect Shigeru Ban — the exterior looks a little bit like a loosely woven basket — and is a non-collecting institution, meaning that its galleries only feature works temporarily. Our visit coincided with the installation of “Fire Worship,” a concrete fire pit by Los Angeles–based artist Oscar Tuazon, which crackled nicely as we soaked up our first panoramic view of the mountains which surround the town.

We all climbed aboard a small bus to travel the five or six blocks from the museum to Hotel Jerome on Aspen’s Main Street, but it was more a nod to our full schedule than a necessity. Among Aspen’s advantages is that its core downtown district is a compact square, and most hotels, restaurants, and event venues are an easy walk from one another.

A tour of the art- and artifact-filled Hotel Jerome, a historic landmark, gave us a crash course in Aspen’s early years as a boom town, which followed the discovery of silver in the area in 1879. Constructed a decade later, the hotel was built in part to help its wealthy builder, Jerome Wheeler, entice his New York City–based socialite wife to move West. When the price of silver crashed in 1893, Aspen — and the hotel — emptied out, and Hotel Jerome eventually was sold for back taxes. On this Sunday evening, the lobby of the long-revived hotel was packed and popping with energy — there was a meeting in progress at the hotel, which proved to be true of almost all of the hotels which we visited. The ambiance could best be described as “rustic mountain chic” — chandeliers and sconces made of antlers abound, and there were enough elk and deer trophies hanging on the walls to populate a small herd.

We next moved to Casa Tua, a restaurant which specializes in Northern Italian cuisine and resembles a chalet. We headed upstairs for cocktails near the fireplace in the restaurant’s cozy second-floor private club and dining room — in outdoorsy Aspen, I soon discovered, crackling logs and a mountain view are never far away. Downstairs, we had dinner around a long table in a nook where we could see a pair of chefs at work through a big, glass-picture window. They stopped to smile and nod at us.

On the next day, the morning was filled with back-to-back site visits to three hotels, all at the base of the 11,212-foot Aspen Mountain, the best-known of four local mountains familiar to skiers and snowboarders. In 1946, founders of Aspen Skiing Company jumpstarted the town’s transformation from abandoned mining town to posh ski resort when they installed what was then the longest ski chairlift in the world on the mountain. The Sundeck offers event space on top of Aspen Mountain.

We started at the red-brick St. Regis Resort, a mere 90-second walk, one hotel guest noted in an online review, from a ski lift. The five-star hotel has a rambling floor plan with large, welcoming lobbies, and offers 179 guest rooms and 25 suites, along with 33,000 square feet of meeting space, including 10,000 square feet of outdoor meeting space. (One meeting room has its own fireplace.) Among its other amenities are a 12,000-square-foot spa and a St. Bernese dog named Kitty, who greets guests out front.

Next, we visited the Aspen Skiing Company’s 30-year-old, five-star Little Nell, whose 92 guest rooms each have a fireplace and most have balconies. Guests can access the adjacent ski lift directly from the hotel and ski back in — they also get to hit the slopes a bit earlier than anyone else and ski down with the ski patrol at the end of the day. In addition to two meeting rooms and outdoor space at the hotel, Little Nell operates two event venues on Aspen Mountain itself — including the Aspen Mountain Club and the larger, more casual Sundeck, both built at the top of the ski lift. The restaurant at the W Aspen offers casual, eclectic, and flexible event space.

We also toured the 88-room W Aspen, which has little traditional meeting space. Two boardrooms available during the summer months — offseason for skiers — are turned into a ski shop during the winter. But the hotel, which opened just last August, offers a fun, modern alternative to traditional luxury hotels. The lobby is stocked with books about Aspen’s counterculture and some rooms feature bunkbeds. For receptions, parties, and other special events, the hotel offers a rooftop WET-DECK, with a bar, firepits, and a DJ stand. Downstairs, 39 Degrees is a retro cocktail lounge that pays homage to the over-the-top taste of former — present? — jet-set clientele.

After refueling with ceviche, tacos, and other Mexican dishes served on the breezy outdoor patio at the newly opened Tatanka restaurant — the name is a Lakota word for buffalo — we divided into teams for a scavenger hunt. For the next three hours, we covered a lot of ground, both figuratively and literally, as we decoded riddles and took photographs of some of Aspen’s landmarks, including the John Denver sanctuary, The Red Onion, a tavern and restaurant which first opened in 1892, and Kemo Sabe, a Western-wear store with an upstairs bar.

We were a competitive bunch, and we tallied up our points over drinks at a patio reception at The Gant, which was the first condominium/hotel hybrid in Aspen when it opened 40 years ago. Its spacious, art-filled condos — they average 900 square feet — are owned by individuals but are booked and managed by The Gant. The Gant also offers 5,500 square feet of meeting space. The hybrid model — where individually owned units are available, along with meeting space — is one that has been widely copied in Aspen where real estate is at a premium, including at the Inn at Aspen, at the base of Buttermilk Mountain, home to the Winter X Games, and the Limelight.

The following morning, we cracked open yet another chapter in Aspen’s history, this one at Aspen Meadows Resort, home to The Aspen Institute. The resort is built on a former 40-acre dairy farm, ringed by mountains overlooking the Roaring Fork River, which was purchased in the 1940s by Walter Paepcke. The Chicago industrialist and Aspen Skiing Company cofounder dreamed of making Aspen a cultural center where everyday citizens could come to discuss ideas that were at the root of “the good life.”

Paepcke began staging festivals, including an international Goethe Bicentennial, honoring the German philosopher, and a music festival, which over the years has culminated in the Aspen Ideas Festival, a weeklong conference that draws attendees and speakers from around the world to discuss arts, science, culture, religion, philosophy, economics, and politics.

Paepcke also invested heavily in thinking about how to create an infrastructure that would be integrated with the area’s environment and support collaboration. In the 1950s, he hired the Bauhaus architect and designer Herbert Bayer to create a site plan and design residential and meeting structures. Bayer proved to be way ahead of his time in his thinking about how meeting environments shape interactions — he built seminar rooms in the round to aid interaction, and both separated and linked residences and meeting areas with peaceful walkways through open fields featuring outdoor sculptures.

Over the years, Aspen Meadows has added more outdoor sculptures to the grounds and more meeting space, including the Doerr-Hosier Center, an airy, modern event space which can accommodate 300 people. There is also a big tent which seats more than 2,000 people and is modeled after the one that was pitched in an open field for the first Aspen Music Festival.

Aspen’s compact footprint and the capacity of the Aspen Meadows venues are what make it possible to bring 1,000-person-plus meetings to Aspen — attendees can be dispersed throughout the city’s hotels and still easily come together for large plenary sessions. The Aspen Chamber of Commerce demonstrated the model on the fam tour participants, assigning us to five different hotels during the course of the trip. I was delighted to find myself at Aspen Meadows, where I could barely tear myself away from the balcony and its beautiful views.

The literal high point of the visit came on our last day, when we took a hike in the Maroon Bells Snowmass Wilderness, a 20-minute-drive from Aspen. It was a perfect autumn day, and the hike was long enough to quiet the chatter in my brain, until all I could hear was the music of the aspen leaves trembling in the breeze.

We regrouped for a final dinner at the Limelight Hotel, which like the rest of Aspen, has a colorful backstory — there was once a rowdy bar and a music venue on the site. The 126-room hotel offers 4,000 square feet of meeting space, including the outdoor terrace where we roasted marshmallows over a fire pit, sipped wine, and drank in the mountain view one last time. Learn more about Aspen at aspenchamber.org.