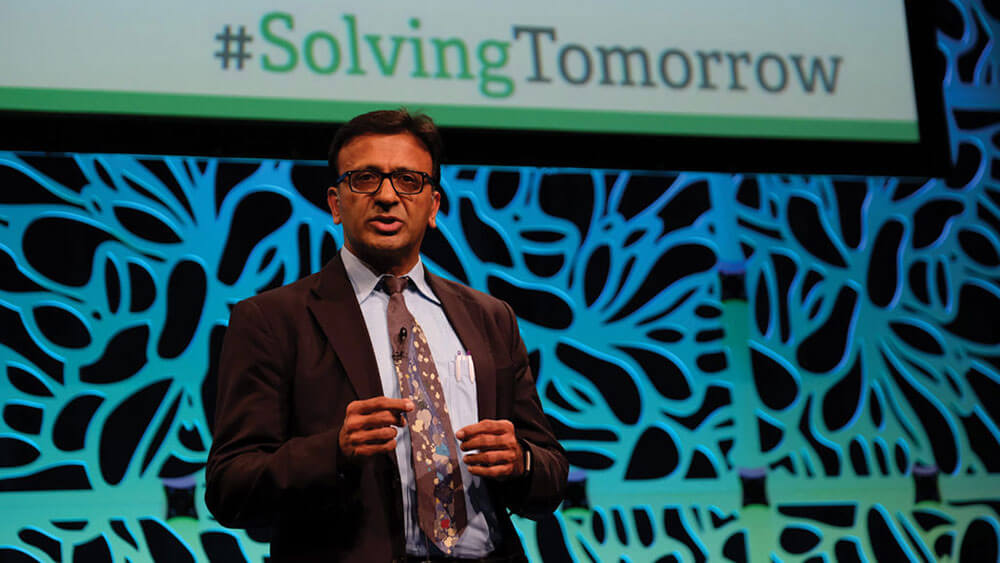 It’s pounded into us from kindergarten — hammered with the weight of Thomas Edison’s famous quote about genius being 99 percent perspiration — that things usually improve slowly and steadily as opposed to in visionary leaps or inspirational ashes.

But what if you wanted to encourage breakthrough thinking? Especially in medicine and health care, maybe the most incremental yet desperate-to-change-the-world field of all — how would you build a conference specifically dedicated to groundbreaking, trailblazing, lifesaving innovations?

Let these four events show you.

ORGANIZER The University of Nebraska Medical Center (UNMC), which uses the conference as part of its strategic-planning cycle. “We have a very mindful process about consciously asking the question, what are the big ideas that we’re missing? What are the big ideas that we thought we had previously that maybe aren’t so important to us anymore?” said Jeffrey Gold, M.D., UNMC’s chancellor. “And one way to answer those questions is, first of all, to convene several hundred community leaders, and secondly, use the forum for inspiring individuals to talk about a breakthrough concept.” The goal, according to the conference’s website, is to “provide a quantum leap in future research endeavors, patient care, and wellness and leadership development of UNMC students, faculty, and staff.”

Outside In The Breakthrough Thinking Conference is ‘constantly looking for people outside of academic medicine to bring their perspectives,’ according to UNMC’s Jeffrey Gold.

WHO ATTENDS UNMC invites nearly 300 people to the conference — leaders from across its academic medical community and the University of Nebraska, plus from other health-care institutions in the area, the nonprofit and business communities, the state legislature, and the governor’s office. About 200 attended this year. UNMC launched the program in 2015, Gold said, “and it’s been growing on an annual basis.”

ON THE PROGRAM It’s a one-day conference — and packed. Four or five keynotes are interspersed with panel and small-group discussions. This year’s keynoters included Christine Moutier, M.D., chief medical officer for the American Foundation for Suicide Prevention, who discussed “Preventing Suicide and Building Resilience,” while last year’s included Michael Tschanz, director of technology and analysis for the Walt Disney Company, who talked about “simulation and virtual-reality modeling seen through the entertainment and tourism industry’s eyes,” Gold said. “We try to be, the best way to put it is, somewhat disruptive. We don’t just bring people from within the industry of academic medicine. We are constantly looking for people outside of academic medicine to bring their perspectives.”

CUTTING EDGE The idea of breakthrough thinking comes from Gap International, a management- consulting firm that works with UNMC on leadership development. Imagine a two-by-two grid with “business as usual” in the upper-left corner, “crisis” in the lower-left, “breakthrough thinking” in the lower-right, and “breakthrough strategies” in the upper-right. “Most organizations, they are kicking along in the upper-left corner in business as usual until something happens,”Gold said. “Their market share changes, their finances change, their leadership changes, and it sends them into a crisis or near-crisis mode. And those that survive — many don’t — will go into a breakthrough-thinking mode and they will emerge, if they’re successful, into a new business as usual.”

FACE TO FACE “We have built a great deal of what I would call coffee time into the meeting,” Gold said. “There are people who will be in the room who don’t see each other routinely, and having people reflect on some of these inspiring talks, having them just talk about what’s going on at their college or their university or in the legislature, etc. — just allowing that cross-fertilization of inspiration seems to be a helpful thing to do. I’m not a big believer in putting hundreds of people in a room and lecturing to them. It’s more the interaction where there’s power.”

ORGANIZER The Cleveland Clinic, the world-renowned academic medical center, whose mission is “to provide better care of the sick, investigation into their problems, and further education of those who serve.” The Medical Innovation Summit is part of that. “Back when our office started this 15 years ago,” said Susan Bernat, general manager of strategic marketing for Cleveland Clinic Innovations, “the thought was, look, we’re constantly traveling to go see this company here about this technology, or this other one on the West Coast. Why not form this setting where we’re bringing all those people here?”

WHO ATTENDS More than 2,250 people are expected at the 2017 summit this month — including physicians, medical-industry leaders, venture capitalists, entrepreneurs, policy makers, researchers, and payers. “We bring them together to really discuss the issues at hand,” Bernat said. “What are the new trends? What are we seeing? How does policy and regulation affect the timeline to get medical innovation through? What does it cost to get it through?”

ON THE PROGRAM This year’s theme is “Genomics & Precision Medicine,” which “may hold the key to managing and eliminating some of the most debilitating diseases,” Peter O’Neill, executive director of Cleveland Clinic Innovations, said in a statement. The program is dominated by panel discussions in a variety of formats — from straightforward group presentations on topics such as “The State of Health-Care Innovation” and “Breaking the Code: Will Next-Generation Sequencing Bring Genomics to the Mainstream?,” to more interactive sessions that include roundtables and small-group work.

There’s also the Challenge, with four early-stage companies that survived an online competition making live pitches at the summit for a chance to win “expert guidance” from Cleveland Clinic staff, as well as other prizes. “It’s having the right content that the right parties will want to come to,” Bernat said, “and then just providing them enough time throughout the day to find those individuals [they want to talk to] and network with them.”

CUTTING EDGE “What we’re looking for is to have conversations about technologies that are going to make an impact in the next, I would say, three to five years,” Bernat said. “So, we want stuff to be a little bit more relevant. It should also be something that companies are currently looking at and investors are currently looking at. That’s our biggest thing — we want it to have a realistic timeline.”

FACE TO FACE “What you see happening is, you get these little pops of people who will break o and start having conversations and developing relationships,” Bernat said, “that then spur on ‘Hey, we’re interested in investing in your technology. We want to help you develop it.’ Bringing the people physically together in this one location versus trying to do things over email or webinars or teleconferences — it’s really getting that conversation going.”

Venture Capitol Minnesota Senator Al Franken recorded a customized message for this year’s Breakthrough Collaborative, which included about 80 clinicians, entrepreneurs, and other stakeholders.

ORGANIZER The Pediatric Device Innovation Consortium (PDIC), founded by Gwenyth Fischer, M.D., a pediatric critical-care physician at the University of Minnesota’s Masonic Children’s Hospital. “The PDIC is really aimed at accelerating pediatric medical-device development,” said Jodi Rebuffoni, program manager for the Office of Discovery and Translation in the university’s Clinical and Translational Science Institute, which partners with the PDIC. “We provide funding opportunities for pediatric devices, among other types of technology.”

WHO ATTENDS Since last year, the Breakthrough Collaborative has been held in conjunction with the University of Minnesota’s Design of Medical Devices Conference, which bills itself as the largest medical-device conference in the world. The idea is to take advantage of the fact that “there’s quite a lot of people that are coming to the Twin Cities,” Rebuffoni said, who “are interested in medical-device development at that time.” About 80 clinicians, entrepreneurs, medical-device developers, parents, and other stakeholders attended this year’s program. “The intention,” she said, “is really to bring industry and community-based partners together with academic researchers to move pediatric devices forward.”

ON THE PROGRAM The Breakthrough Collaborative runs a half day, with a keynote, a handful of featured speakers, and a panel. This year, the program was focused on funding, “because it can be extremely difficult to find funding to develop small-market devices,” Rebuffoni said. “We tend to flex the focus a little bit based on what’s going on in the medical-device industry or what we’re hearing from our attendees.” Plus, Minnesota’s two U.S. senators — Amy Klobuchar and Al Franken — created customized video messages that were played during the conference. “One of the things we try to focus on,” Rebuffoni said, “is policy around medical-device development.”

CUTTING EDGE How does the Breakthrough Collaborative define “breakthrough”? “At the heart of it is, if we help to move something forward that wouldn’t have moved forward without our involvement,” Rebuffoni said, “whether that’s a collaboration or a device or access to a funding opportunity.”

[pullquote]An opportunity for people to get to know one another.[/pullquote]

FACE TO FACE “Sometimes it’s hard [for clinicians and researchers] to meet people in [the medical-device] industry, and then industry oftentimes has a really hard time finding and creating collaborative relationships with academic researchers, especially in small markets like pediatrics,” Rebuffoni said. “[Fischer] just wanted to have an opportunity for people to get to know one another.”

WHO ATTENDS Total attendance is around a thousand people — 200 to 300 of whom are entrepreneurs from North Carolina–based life-sciences companies, in areas such as pharmaceuticals, biotechnology, diagnostics, digital health, drug delivery, and medical devices. There are corporate partners, representing companies like Pfizer and GSK, as well as local venture capitalists, plus about 75 investors from across the United States. “We’re trying to get them to match-make networks,” Wilson said. “The companies can really be at varying stages. We see very, very early-stage companies, all the way up to companies that have gotten through Phase 3 [of clinical trials]. It’s just bringing this whole group of people together.” ON THE PROGRAM The 2017 Life Science Conference offered a mix of programming, including featured speakers such as Anthony Copeland, North Carolina’s secretary of commerce, and Robert M. Cali , M.D., a former commissioner of the U.S. Food and Drug Administration; the Innovation Room, an exhibit-hall-type space that offers one-on-one networking with more than 50 local companies that have applied to be there; and two- and five-minute onstage presentations by companies that want exposure. “They can make a pitch of what they’re looking for at the time,” said Emily McLoughlin, CED’s communications manager. “Are they looking for strategic partners or talent or funding? It’s a way to be in front of the entire audience to showcase their company and give that pitch.”

FACE TO FACE “One of the core things is the actual networking that goes on at the conference,” Wilson said. “We believe that’s important. You can have conference calls and you can Skype and all that, but it loses something in the translation. The opportunity to see people and talk to people over a two-day period is really important.”