At its peak, George R. Brown hosted more than 10,000 evacuees in five exhibit halls — and included a “mini Walmart.”

On Thursday, Aug. 24, the weather system that would grow into Hurricane Harvey was still just a tropical storm brewing in the Gulf of Mexico. But the Houston First Corporation, which operates Houston’s performing-arts and convention facilities, was already preparing the George R. Brown Convention Center (GRB) for something big. Luther Villagomez, GRB’s chief operating officer, and other management staff met with Visit Houston and local emergency- management teams to monitor the storm and determine how they could best serve Houstonians.

“Sometimes, we are a transit center, where we are moving people from flooded areas in the Gulf Coast where there’s prone to be flooding,” Villagomez said in a recent interview, “and we transfer them here to shelters farther north of Houston.”

But in this case, GRB was to be a shelter of last resort for flood evacuees who didn’t make it out of the area before severe weather hit. And some of them ended up staying for a while.

By Friday, Aug. 25, Harvey was a Category 4 hurricane that made landfall in Port Aransas, Texas, roughly 200 miles from Houston. Staffers with Houston First and TDIndustries — a Houston First subcontractor — were hard at work ensuring GRB was in top shape. It’s something that longtime employees at the center have grown accustomed to. GRB has been used as a shelter numerous times, notably during Hurricanes Katrina and Rita in 2005. “From that history,” Villagomez said, “we learned quite a bit of how to run shelters along with the city. From there on, we did our lessons learned on those projects on how best to operate the convention center when there is a storm in the gulf.”

According to Villagomez, things went smoothly. Employees heading up security, HVAC, and lighting prepared the facility for the storm, checking for vulnerabilities in the structure and setting up temporary showers that could be used by the 1,000 evacuees who were anticipated to arrive in two day’s time. Essential staff needed to help cook and clean were also called on to ready food, water, and sleeping quarters to accommodate up to 4,000 evacuees for five days — just in case there were a few more people than expected. At 11 a.m. on Sunday, Aug. 27 — with Harvey still at Category 4 strength and raining down on Houston — fewer than 15 essential staff members opened GRB’s doors to 2,500 evacuees, more than twice what they expected. GRB opened up all five of its exhibit halls — more than a half-million square feet — instead of just Hall E as they’d initially planned to accommodate its many guests. People who needed to dry off could use one of the 800 towels donated by the Hilton Americas- Houston, which adjoins the convention center, and everyone was served three hot meals a day under the leadership of Chef Edward De La Garza.

But GRB was just getting started. Due to the severity of Harvey, which dumped between 30 and 50 inches of rain on the Houston area, evacuees kept coming as the hours passed. By Monday, Aug. 28, the center housed 8,500 people. “It grew quite substantially,” Villagomez said. “At the end of day three [Tuesday, Aug. 29], we were up to the maximum — 10,300 in population.”

As the population grew to become what Villagomez, who served as GRB’s in-house, on-site incident commander, describes as a “city center,” some concern also started to grow. Although as many as 2,000 volunteers a day visited GRB to serve food and sort donations, as of Aug. 29, the American Red Cross hadn’t yet arrived with the additional food, bedding, and other goods required to support such a large group. “We had limited resources of staffing and trucks that could deliver food,” Villagomez said.

The Red Cross arrived on Wednesday, Aug. 30, with adequate relief supplies, including cots for every evacuee. The struggle then became managing thousands of evacuees for what would become a 22-day shelter operation.

“Fortunately, a lot of things kind of worked in our favor,” Villagomez said. “We were in between shows, so we had available to us five open exhibit halls on the ground level, about 550,000 square feet. That allowed us to not have to spend time moving exhibit material out or displays out of the space, and gave us the luxury of being able to really immediately begin to receive evacuees that were coming to the shelter.” 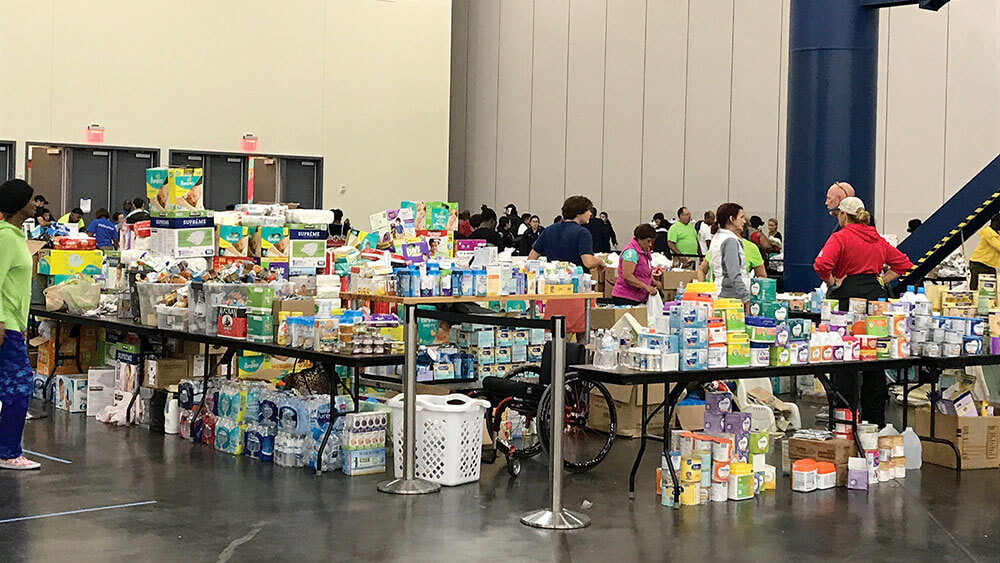 It Took a Village

GRB ended up housing roughly 10,000 evacuees for close to a week. During that time, the center’s maintenance team was put to the test. “For us, the biggest part was just making sure everybody was comfortable and everything was working like it should,” said T.J. Shiflet, a project manager for TDIndustries.

“It was just a constant,” Shiflet said. “They were constantly walking the floor just to make sure the comfort level was good based off of temperature, that lights were on, and that all the toilets were working in all the bathrooms. It was definitely a big task, and they were running around constantly. Ten-thousand people in that building was quite a big load.”

In addition to providing evacuees with clean, comfortable facilities, the TDIndustries team was tasked with continuously checking the building for any structural issues from the storm. Although the only notable damage GRB sustained during Harvey was a flooded underground parking garage, maintenance workers patched small roof leaks for the duration of the hurricane.

According to Villagomez, another key component of the operation was keeping the lines of communication open between GRB’s management, government agencies, and local law enforcement. “When we [become] a shelter, we set up a command center [on the second floor of the facility],” he said. “The command center is made up of representatives of the convention, security, the police, and the State Guard, our internal security, [and those overseeing] medical, health, housing, transportation, contributions, and donations. Management met twice a day in the morning and the evening, and we resolved problems as they came.”

This included involving a Houston Police Department on-site incident commander to address any security issues in real time. “If someone in the shelter was not conforming to the rules of our facility, they were removed if they were causing problems,” Villagomez said. “But I think the key thing was they did such a phenomenal job that there was never really a time when you felt uncomfortable with the security. I think that was really instrumental in keeping everybody to feel safe — the shelter residents — so that you could run the operation comfortably.”

Villagomez also credits Walmart for supplying truckloads of food, water, baby formula, diapers, toiletries, and other necessities. “They practically ran a mini Walmart,” Villagomez said, “so that the evacuees could pick up whatever needs they had at the shelter.”

As the water receded and Houstonians were moved to temporary homes, GRB began to draw down to a population of 5,000. By Sept. 11, the final week of the operation, that number was reduced to about 2,000 evacuees. Staff watched evacuees leave to rebuild their lives. In the span of the 22 days GRB served as a shelter, De La Garza estimates he prepared 250,000 hot meals. “When you’ve lost all your personal belongings and maybe your home,” Villagomez said, “…if you can imagine having lost everything and being in a place that you can begin to kind of put things back together — [that] is really what the shelter was all about.”