2020 NAIAS will include activations around Cobo Center such as ride-and-drives and self-driving vehicle demonstrations.

Every January for the last 31 years, the North American International Auto Show (NAIAS) has taken over Detroit’s Cobo Center for more than two weeks, drawing the biggest names in the automobile industry to display their newest innovations to the public — an audience that often exceeds 700,000 people. Next year, the Detroit Auto Show, as it’s also known, will make a major change: It will span 12 days instead of 14, and it will take place in June.

The shift represents an effort by the Detroit Auto Dealers Association (DADA), the entity responsible for producing NAIAS, to recast its flagship show as a more flexible, forward-thinking industry event — one that spills into Detroit itself, with an outdoor expansion that wraps around Cobo Center and stretches into the neighboring riverfront and Detroit’s rapidly evolving downtown. A date change to June — when temperatures peak in the high 70s vs. January’s high 20s — will give auto manufacturers more space to offer experiential programming to attendees, like ride-and-drives, self-driving vehicle demonstrations, and outdoor product showcases. It will also allow the NAIAS to ramp up its entertainment offerings. A promotional video released last year showcases a plan for a festival-like atmosphere, complete with live concerts and outdoor areas that feature games and food trucks. “Our show needed to evolve and change,” said Doug North, president of North Brothers Ford and chairman of the 2020 NAIAS. “And we needed to not just tiptoe forward, but … take a large step forward to make sure that what we were providing to all of the stakeholders was relevant, was current, and was something they would see as being a big benefit to learn, to experience, to integrate, and to understand more the direction that not only automobiles, but automobile technology and mobility, were moving.”

While North acknowledged that some manufacturers are choosing to debut their new vehicles at private-invite events instead of at major auto shows like NAIAS, he said that this strategy is partly due to a slowed pace of new vehicle releases, and that there are times when it may make sense. However, he said, “I think we’re going to be successful in providing a stage unlike any other that they can’t do someplace else.”

In terms of the changes in place for the June 2020 NAIAS, North feels confident. “I don’t feel like there is anything else we could do to address manufacturers’ and consumers’ needs, desires, and wishes as we understand them,” he said. While he couldn’t comment whether any manufacturers who have left the show would be returning in 2020, he did say that conversations are ongoing with partners who have expressed enthusiasm for the revamped show’s potential. “By creating these new types of spaces and new types of opportunities, and a new ROI equation, we really hope that we can entice and maybe interest some of those brands that have left previously to reconsider and rejoin us next year.”

When DADA reached the conclusion that the show needed to evolve to meet these goals, the date change ranked high on the list of alterations. Moving the show to June, “gave us all of the things that our current show was missing,” North said. The date change literally and figuratively opened up more space for the show to expand. “This allows us to provide a much broader tablet,” he said, so that “a tier-one supplier or a manufacturer could display their product in a variety of different ways that would cater to displaying what the product could do, cater to customers wanting to interact in a hands-on scenario.”

In preparing for this shift, North said that the association identified the changes happening industry-wide, particularly the growing role of technology for the show’s OEMs (original equipment manufacturers) and tier-one suppliers. In 2020, AutoMobili-D, a 150,000-square-foot mobility and technology showcase NAIAS debuted three years ago, will move upstairs to the main floor. “Consumers will get to see more of that, as well as get the opportunity to see more moving technology displays both inside and outside,” North said.

Moving NAIAS to June also has logistical and financial benefits. It will cut down on the length of time it takes exhibitors to move in — from five to eight weeks to an estimated three weeks in 2020 and an estimated two weeks for 2021, because “we’re not working around holiday schedules and weather as we have in the past,” North said. In turn, the shorter move-in schedule will cut costs for exhibitors. Two days have been scratched from the show’s timeline, which will further help the bottom line. In addition, the NAIAS will now follow the annual Detroit Grand Prix at Belle Isle park earlier in the month. “The potential to create a month-long automotive festival in Detroit, starting with the Detroit Grand Prix, going through our show, and concluding with the nationally celebrated fireworks on the river, will provide an unmatched festival-like experience for all attendees,” Rod Alberts, executive director of the Detroit Auto Show, said in a press release.

Added up, this newly expanded focus and footprint totals an intriguing offer — one that DADA hopes will translate to everyone who participates in the NAIAS. “It provides us with a much better opportunity for a manufacturer who has product, a consumer interested in that product, and media who want to see product in a variety of ways — not just sitting on a stand,” North said. “It really gives us the best white sheet of paper you could ask for.

For more information on the Detroit Auto Show, visit naias.com. A waterfront view of Cobo Hall, where 2020 NAIAS will be held. Campus Martius Park in Detroit, MI. Moving to the summer will allow the auto show to spread out into the city, and offer participants a variety of attractions and entertainment options. 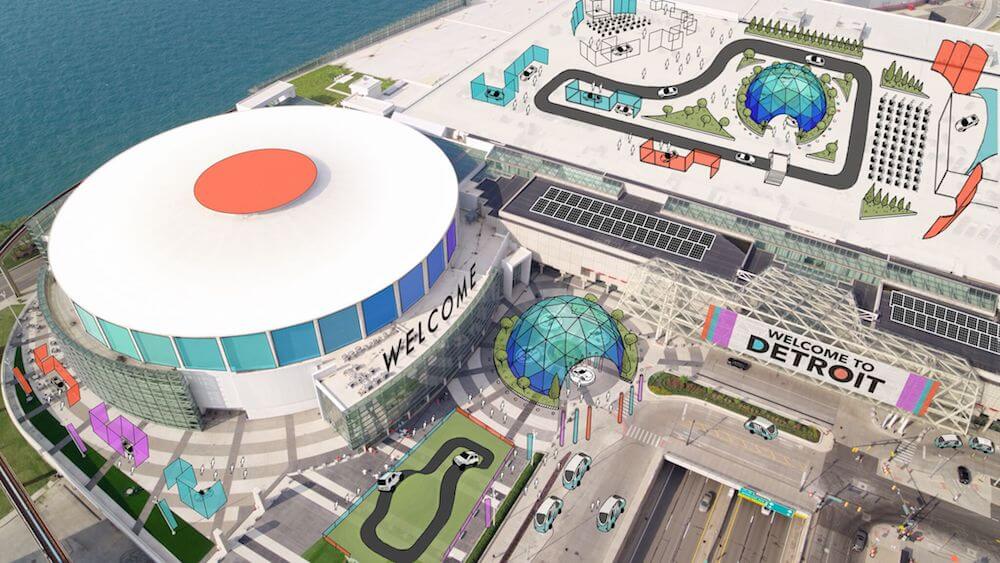 The road to 2020 NAIAS will include ride-and-drives, self-driving vehicle demonstrations, and outdoor product showcases.